The cabinet I will grow the strawberries in is the Bonanza G-Leds 560. Growing with led grow lights has never been so easy. The Bonanza cabinet has a grow service of 1-m2. It is equiped with a powerful G-tools 2-speed fan. At speed 1 the extraxtor fan moves 220-m3 of air and at speed 2 360-m3. More then enough to remove the heat produced by the G-Leds 560 grow light.

The extractor draws the air through a Prima Klima carbon filter before it’s blown out through the roof of the cabinet. One of the characteristics of activated carbon is that it filters pollution from the air. The carbon filter removes smells and makes sure you don’t cause any annoyances. Some fertilizers can produce a lot of smell.
In order to filter properly the “contact time” of the polluted air with the carbon should be just right. Therfore it’s extremely important that the capacity of the filter matches the capacity of the extractor fan.
When your extractor is to big the air will be drawn through the filter to fast and the contact time will be to short. If the extractor is to small the air is drawn through the filter to slow and the contact time is to long. In both cases the air won’t be filtered properly.
The extractors and filters used by us are made in the same factory (Prima Klima) and have been designed to be used together. Therefore the contact time in the extractor/filter combinations used by us is perfect.
Ofcourse the amount of pollution that can be filtered is limited. Eventually the carbon will become saturated and the filter needs to be replaced. Depending on the amount of pollution and the air humidity a filter on average lasts one year
The extractor runs 24/7, this causes under pressure inside the cabinet. The under pressure causes an air flow from outside the cabinet to within. So there’s no need to be afraid that there will be unfiltered air leaking from the cabinet. The air can only leave the cabinet through the carbon filter.
Air is like water and will always take the way of the least resistance. In order to let in cool, CO2 rich air the cabinet is fitted with 4 air inlets. They are installed at the bottom of the back side of the cabinet.
The inlets consist of two parts, a core with a diameter of 7cm and a shell. The core is pushed through a round hole in the wall of the cabinet. The shell is clicked on the core without closing it all together.
Because of the under pressure inside the cabinet fresh air is drawn in through the inlets without letting the light shine out.

Cross section of the air inlet.

The air inlets are mounted at the bottom of the back side of the cabinet. The filter (the air suction point)is mounted on the frontside of the ceiling. So there’s a diagonal air flow through the cabinet from bottom back side to front top side. Perfect!
Against the ceiling of the cabinet the fused timer box is  mounted. There are 5 sockets on the timer box. With the clock of the timer two sockets can be switched ON and OFF automaticly. In one of these sockets the plug of the G-Leds 560 grow light is plugged. With the clock the amount of hours light ON can be set. For now I’ve set it at 18 hours ON per day.
The other 3 sockets have continous power. These I use for fans and the eb & flow irrigation system. More on this later.

Demand for led grow lights has grown rapidly over the past few years. Supply as well. For a layman it has become almost impossible to see the forest for the trees.
We have asked a producer of high end led grow lights to produce a light under our own lable, G-Leds The design of the spectrum is ours but we use an existing armature. The led panel consists of Cree and Osram led diodes. Cree and Osram probably produce the world’s best horticultural leds.
The G-leds have a large aluminium heat sink. This absorbs most of the heat produced by the leds. So only a few small extra fans are needed to do the rest of the cooling. This makes the G-leds extremely silent. 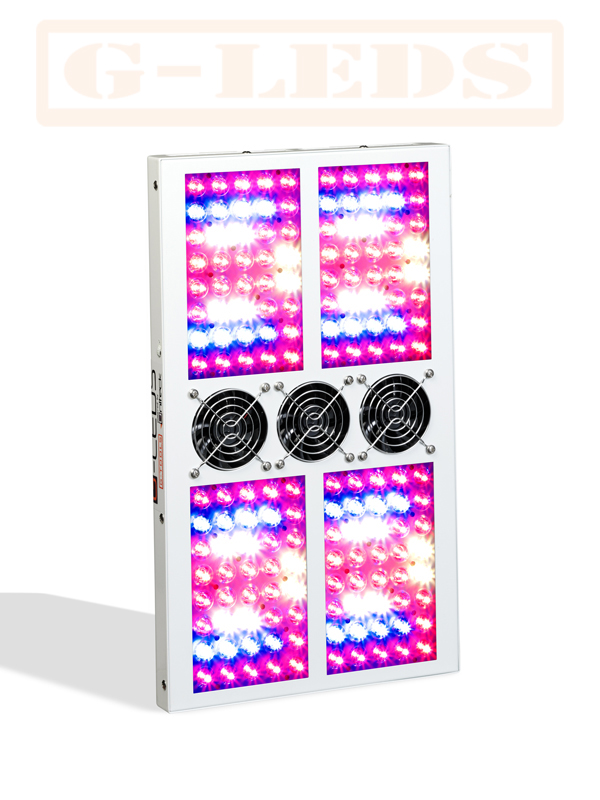 With the switches on the lamp the white, blue and red leds can be switched on and off seperately.

The led power of this lamp is 560W, this is comparable with a 600W HPS light.  The real power, the consumed power, is only 360W. If you run this light for 12 hours per day with all the different led groups switched ON it still only consumes around €22,- electricity per month.

Using an automated irrigation system has just advantages. It allows you to leave the house for a few days and, more important, it increases your yields. Your plants, just like you, like their meals at regular times.
In my last blog, growing basil on rockwool, I worked with an automatic drip irrigation system.
The eb & flow system I’m using now consists of many of the same parts.

The eb & flow irrigation system is ideal for plants growing in pots with soil or cocos. Instead of being dripped from above as is done in the drip irrigation system, the pots are placed in a Danish tray which is filled with a layer of water at set times and then drains again. Eb and flow.
So it’s important to use pots that have holes in the bottom, or, like I do, use fabric pots.
Just like the drip irrigation system the eb & flow system consists of an aluminium grow table with a grow tray with raised edges (Danish tray). Underneath the table is the watertank with two pumps.
A circulation pump and a feed pump. The circulation pump keeps the water/nutrient solution moving.
The circulation pump ensures that the nutrients don’t sink to the bottom of the tank, oxygen is added to the water and bacteria growth is slowed down.
I’ve filled the watertank with 30 liter of water and 30ML Aptus All in One fertiliser and 7,5ML Startbooster, the root stimulator from Aptus.
To bring down the PH of the solution to a level between 5,8 and 6,4 I use Canna PH-.
With a quick coupling the feed pump is connected to the drain of the Danish tray. A timer switches ON the feed pump once a day for two minutes.
In these two minutes a layer of 2 cm of water is being pumped into the Danish tray. Through the holes in the bottom of the pots the water is being absorbed by the soil.
When the pump is switched OFF by the timer the water flows back into the watertank.

First the aluminium grow table is placed inside the cabinet.

Then the Danish tray is placed on the table.

Through the lower sliding doors of the cabinet the watertank can now be placed underneath the table.

With  simple click couplings the feed pump is connected to the drain of the Danish tray.

The watertank is filled with water and nutrients.

The plug of the feed pump (red dot) is plugged into the timer. The circulation pump (blue dot) into the supplied extension cord.

When the feed pump switches on a layer of water is pumped into the Danish tray.

Now that the cabinet and the eb & flow system have been set up the strawberries can be planted.
I’ve got 15 strawberry plants that I’ll plant in 3,8 liter Rootpouch pots. Rootpouch pots are made of fabric and have very high air permeability. This has a very positive effect on root development.
The main reason I use them is that they perform very well in the eb & flow system. When the Danish tray floods with water the pots sit in the water. The fabric absorbs the water very well  and holds it for longer periods of time.
Now the strawberries have been planted all I’ve got left to do is programming the timer of the feed pump.
For now I think one feed shift per day is enough so I program the timer for 1 x 2 minutes ON per day.
When the plants get bigger I will add another shift.
The timer for the light I will set for 18 hours ON per day. I will only switch the white and blue leds on for now.
The coming week there will be not much to do.

The strawberries are planted in 3,8 liter Rootpouch pots filled with Guanokalong soil.

It has been almost two weeks since I last up-dated this blog. The strawberries have grown quite a bit. The first strawberries have appeared and are turning red. Roots are starting to grow throught the bottom of some of the Rootpouch pots.

The strawberries on  2-6-2017. Until today only the white and blue leds were switched ON.

Most plants have strawberries and some are starting to turn red.

Roots are growing through the bottom of the Rootpouch pots.

Bad news! Small insects are crawling on one of the weaker plants. When I look closely I also see a fine spiderweb covering the leaves. This is defenitely the beginning of a spidermite outbreak. If I don’t treat it fast the whole garden will be covered in web and my strawberries will die. It’s difficult to prevent an outbreak during the summer months. The eggs of the spidermite could have been in the soil or they have travelled in the clothes of one of the many visitors that come to see our showroom.
Time to spray pesticides. I’ve always made my own biological pesticides, a mix of chili’s, garlic and dishwashing detergent. The outbreak is still small enough to be effictively treated with this “soft” remedy.

The spidermites and the web are clearly visible. Time for action.

I’ve set the light ON period for 16 hours per day. Normally strawberries grow in the summertime when the days are around 16 hours long. The red leds have also been switched on now. The strawberries have started to devellop fruits and can use the extra (red) light.
I keep giving them “Aptus all in one” 1 ML/liter of water. The Aptus startbooster I replaced for “Regulator”.

The red leds are switched on

The strawberries in the typical purple led light.

The spidermite outbreak is under control. Today I’ve sprayed the plants again with the same mixture of chili’s, garlic and dishwashing detergent to kill all the spidermites that have hatched in the past 10 days. Spraying only kills the spidermites but doesn’t do anything to the eggs. It’s therefore important to repeat the treatment once or twice after a week or 10 days.
In the meantime the strawberry production has really set in. Today I harvested the first 500 grams. The production will increase fast now. The more you pick the more the plants produce.

What are you looking for?

Any cookies that may not be particularly necessary for the website to function and is used specifically to collect user personal data via analytics, ads, other embedded contents are termed as non-necessary cookies. It is mandatory to procure user consent prior to running these cookies on your website.